Chris and I drove around White Swan and visited people this morning/afternoon. I made a map that shows which areas were damaged. Most of the town and were spared. The fire fortunately missed the Cougar Den with their above ground propane tanks. Seventeen houses burned down, of which sixteen were occupied. The town has water and parts have electricity. The parts that don't have power should have power by this evening. Everyone can get back into town except for the Coburn Loop neighborhood which has lots of downed power lines.

The fire spread quickly because of the high winds: winds from 50-60 miles an hour with gusts up to 70. The wind also tore shingles and tar paper off of lots of buildings. Probably half of the houses around White Swan have roof damage. Some were missing half the shingles.

Chris and I spoke with one lady who told us she saw the fire heading straight to her house. She started praying in Jesus' name and as she prayed the wind changed direction and the fire turned northeast and missed her house. She was crying and very encouraging to us.

The immediate needs in the community are not as severe as we had feared, but lots of homes need roofing and there's also a need for homes. Chris is in talks with the Tribal Emergency Group and with to about what work needs to be done and what needs we can meet.

Thankfully, most of the town was spared and we have heard of no major injuries or fatalities. Thanks for your prayers. If you'd like to make a donation to help those displaced by the fire/wind, send a tax-deductible donation marked "Mercy Ministry" to: 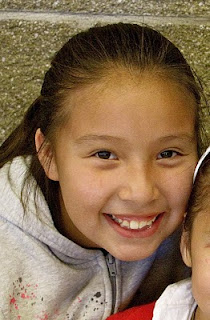 This last Tuesday we didn’t take the kids as one group to tell them the Bible story for that night, but instead split up to tell each of our individual groups the story while they did their worksheets. My group consists of the older girls (grades 3-5, once they reach 6th grade they enter the youth group if they want to. The girls that came last Tuesday were Violetta who is in 6th grade, yet she prefers to stay in my small group instead of gong to youth group, Alexa (5th grade), Lanisha (5th grade), Janisha (5th grade) and her impossible to please sister Tajah, and Violetta’ s sweet younger sister Lorenda (3rd grade).


As soon as I began to read the Bible story for that night Janisha tried to disrupt the entire group. She would interrupt, talk with the other girls who were trying to listen, and do anything that she knew would make everyone else as miserable as she felt. In the end none of the girls knew the story of the Sheppards and Wise Men, or about King Harrod who was ready to kill this new King. When I asked them questions on the story each time the said, “ Jesus?”

I gave up on the questions on the sheet and asked them a different one: “ Why is Jesus so great? What makes him so uniquely important?” the answers I got were, “Because He’ s a King.” Which seemed to be one of the few things they picked up from the story.

“What difference does that make? There were lots of kings, why was Jesus and better than any of them?”

Lorenda answered my question first, “ He had money and gold.” Several other girls added in that He had power, strength, and freedom. Each girl gave an example of what would make a king; each girl said an example of something they had never had. As all of the girls gave examples Janisha whispered, “ He had a home.” As soon as the words left her mouth I remembered that Janisha, Tajah, Unique (4), and Yakama (2) had all lost their house. No one had been living in the house since they couldn’t pay the electricity bill, the girls had been going from place to place for some time, but nonetheless, they had lost the place they called home to a fire, and probably felt more homeless than they had before. “ He had a castle, kings have castles.” All of the girls turned to me as though expecting me to do something; I have no idea what they were waiting for.

“Nope.”
Janisha looked confused, “ What?”
“ Jesus was homeless.”
“ He was?”
“ Yep, Jesus never had a home, or gold, or power. So why is it so important that he came?”
The rest of the girls followed Janisha into silent thought. After a few moments Alexa spoke up, “He died on the cross!”
“ Why?”
“ To save us!”

Something told me that even though these girls had been coming to Bible Study and Kids Club as long as they could remember they didn't really understand what it all meant even though they knew the answers. I asked if any of them remembered when we did a story at kids club when we had two people and two sheets, one of the sheets had been splattered with mud and was torn, the other was white and clean. They all remembered, especially Lanisha whose brother had been the one to wear the white sheet. I explained how we wore dirty sheets, we were dirty with sin and Jesus was clean and pure. I explained why we should’ve been the ones to die, and why Jesus died to save us. And how Jesus took our sin on himself and put his pure white sheet over our sinfulness. The girls all understood and now, I’ m sure, feel different about Jesus, especially Janisha who hopefully will welcome the gospel more openly having found something she had in common with him.
Posted by Sacred Road at 2:23 PM