This is actually the "short list". Go ahead and start on these and we'll give you some more good ones later.

I especially hope those of you coming on spring and summer teams will read and watch as much as you can!


Books
Alexie, Sherman. The Absolutely True Diary of a Part-Time Indian.
Well written, somewhat autobiographical novel of a native man from the northwest.

Frazier, Ian. On the Rez. (Picador, 2001).
An inside look at modern day reservation life.

Nerburn, Kent. Neither Wolf nor Dog: On Forgotten Roads with an Indian Elder.

Kootenay, Adolphus. Out of Bondage: Finding the Path out of Indian Religion and Into the Kingdom of God (Bloomington, IN: Authorhouse, 2004).

Movies
Snow Walker
Set in the 50s in the Northwest Territory. Contrasts the idea of living in and with nature to relying on technology. Great story, a little rough at the begining.

The Edge of America
Story about a native girls' basketball team with a new, black coach. Kind of rough but realistic.

Last of the Mohicans
There are many similarities between the traditional Cherokee culture and the Mohicans. This film was made near Cherokee and many of the cast members were Cherokee.

Into the West
(Six hours, Produced by Stephen Spielberg)Excellent for families--some violence, but made to be used in schools. Drama/documentary; historically accurate.

500 Nations"
500 Nations is an eight-part documentary that explores the history of the indigenous peoples of North and Central America, from pre-Colombian times through the period of European contact and colonization, to the end of the 19th century and the subjugation of the Plains Indians of North America. 500 Nations utilizes historical texts, eyewitness accounts, pictorial sources and computer graphic reconstructions to explore the magnificent civilizations which flourished prior to contact with Western civilization, and to tell the dramatic and tragic story of the Native American nations' desperate attempts to retain their way of life against overwhelming odds." http://www.500nations.tv/home.htm

Please visit the link below to read an very well done, informative newspaper article (along with audio and great photos) on the Yakama Nation's men:
http://www.yakima-herald.com/nativesons

Some of the men and boys (and the woman) featured are friends of ours!

Also, if you have not visited our friends' Bruce and Linda Farrant's blog please do so. http://www.onechurchonetribe.com/
Posted by Sacred Road at 11:33 AM

The Lakota Sioux are Seceding! 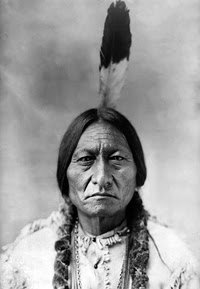 Lakota withdraw from treaties, declare independence from U.S.
The Lakota Sioux Indians, whose ancestors include Sitting Bull, Red Cloud and Crazy Horse, have withdrawn from all treaties their forefathers signed with the U.S. government and have declared their independence. A delegation delivered the news to the State Department earlier this week.

Portions of Nebraska, South Dakota, North Dakota, Montana and Wyoming comprise Lakota country, and the tribe says that if the federal government doesn't begin diplomatic discussions promptly, liens will be filed on property in the five-state region. Here's the news release.

"We are no longer citizens of the United States of America and all those who live in the five-state area that encompasses our country are free to join us," said Russell Means, a longtime Indian rights activist. "This is according to the laws of the United States, specifically Article 6 of the Constitution," which states that treaties are the supreme law of the land.

"It is also within the laws on treaties passed at the Vienna Convention and put into effect by the U.S. and the rest of the international community in 1980. We are legally within our rights to be free and independent," he added during a press conference yesterday in Washington.

The new country would issue its own passports and driver licenses, and living there would be tax-free, provided residents renounce their U.S. citizenship, he said, according to a report from Agence France-Presse.

The Lakota say the United States has never honored the pacts, signed with the Great Sioux Nation in 1851 and 1868 at Fort Laramie, Wyo.

"We have 33 treaties with the United States that they have not lived by. They continue to take our land, our water, our children," said Phyllis Young, who helped organize the first international conference on indigenous rights in Geneva in 1977.

Means said the "annexation" of native American land had turned the Lakota into "facsimiles of white people."

In 1974, the Lakota drafted a declaration of continuing independence. Their cause got a boost in September, when the United Nations adopted a non-binding declaration on the rights of indigenous peoples. The Bush administration opposed the measure. 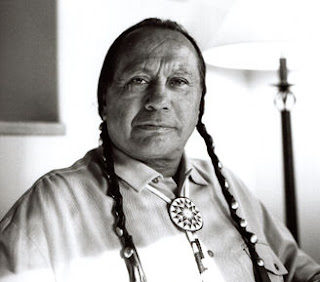 
To learn more about Russell Means visit his website http://www.russellmeans.com/
Posted by Sacred Road at 3:29 PM