Camping, Roofing, and Turkeys, oh my! 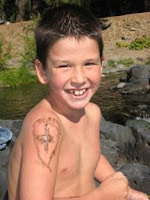 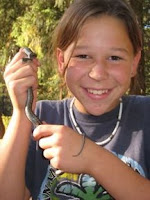 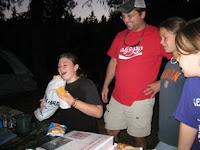 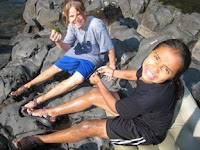 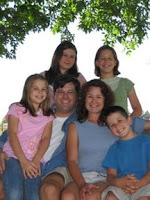 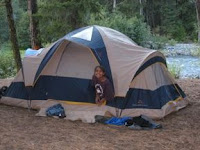 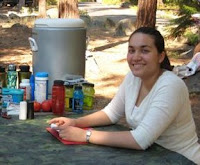 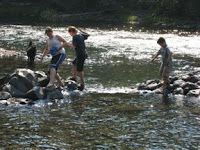 Before I tell you about "camping, roofing, and turkeys" I have to tell you how thrilled we are to have Veronica (photo above) as part of the team. She's only been here one week but it already seems like she is part of the family! She is eager to serve, cheerful, loves our kids, works really hard, and really desires to be a blessing to us and the Yakama people. She has been such an encouragment to us! We knew she'd be great but she has exceeded our expectations! Please keep her in your prayers. Ask the Lord to protect her, sustain her, guide her, bless her, and use her to build His Kingdom here on the "rez". 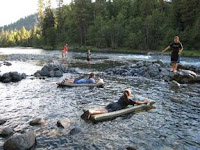 Ann Marie's birthday was Sept. 12 and she wanted to go camping with the family (and Marisol and Veronica) instead of having a birthday party. So we went to one of our favorite camping spots for a few days, Sawmill Flats in the Cascades. We swam and played in the Little Naches River, caught a snake, gave Ann Marie her gifts, and the kids did school work with Veronica. I thought you might like to see a few family photos.

Saturday we (Veronica, Ann Marie, and I) gathered up the Broncho kids and Bobby Samson (their cousin) and went out to Perry Harrison's home a few miles west of White Swan to help work on the roof. Perry's ex-wife, Diane, paid all the teenagers $10 an hour to rip off the old roofs and help get the new decking up and in place! This really exciting because it was the first time we've had a work crew consisting primarily of teens from the community on a worksite! That is something we had hoped to see in the fairly distant future. The home we worked on is 100 years old! We were tearing off the origional cedar shingles that were under three layers of newer shingles. When we would jam a "shingle shovel" under a layer and pry it up, often the nails would pop out and we would be showered with volcanic ash from the Mt. Saint Helens eruption in 1980! It was amazing to work on that roof and think about the folks who nailed down those very same shingles in 1907. I was very proud of the guys and girls in our little work crew. They worked hard for nine hours and did a good job. Everyone also learned some new skills such as how to use radial saws, miter saws, tape measures, chalk lines, etc. I hope that the new found skills may come in handy in the future. Diane was a patient teacher and really loved on the kids. They were so proud and happy on the way home with $90 in their pockets and a real sense of accomplishment. On top of that, nobody got hurt! 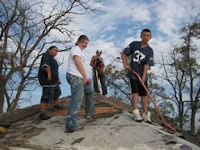 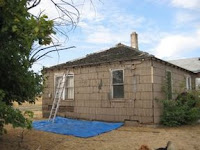 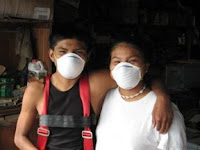 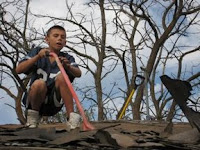 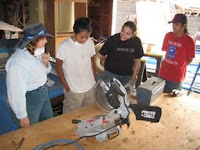 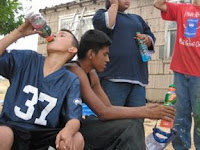 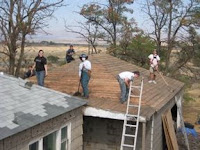 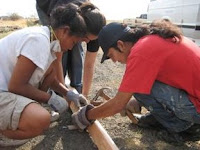 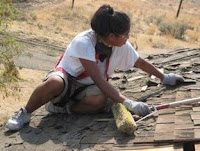 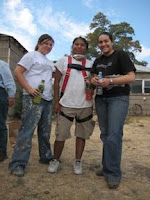 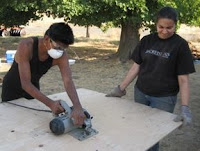 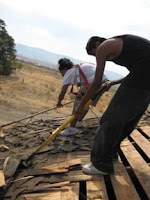 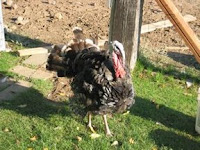 that the three turkeys we have been raising since early spring were getting too big for the oven. That meant it was time to get the chopping block ready, catch 'em, and get them ready for the freezer! David helped catch them and carry them to the block. After a little while they were plucked, cleaned, bagged and ready for Thanksgiving and Christmas! Altogether there's about 70 lbs. of "organic" turkey in the freezer! 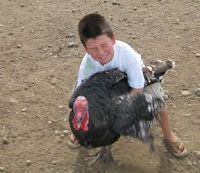 Finally, please visit Bruce and Linda Farrant's blog: http://www.onechurchonetribe.com/
and keep up with them. They are the Church
Planting Coordinators for Native America under Mission to North America (MNA) which is the church planting arm of the Presbyterian Church in America. They are like family to us and are a tremendous blessing and encouragement to us. If you are interested in Native America you will want to stay up to speed with what the Farrants are doing!