Sacred Road Staff Reflect on Recent Events in the Community 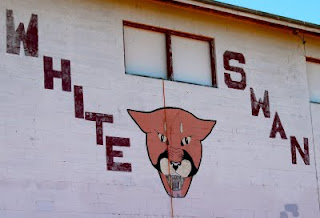 A couple weeks back we had the opportunity to attend White Swan High’s first home football game. It was a cool late summer evening under the lights and it was exciting to see the community come out. We saw many familiar faces and had the joy of witnessing the kids’ reactions to seeing us outside of “church” or Kids’ Club. Most importantly, we had the pleasure of being a part of the community in cheering on their team. For once we weren’t outsiders and it felt good to relax and hang out in the place in which we live and work. I think our presence on a weekend night surprised a lot of people, both kids and adults, but we enjoyed the occasion to sit with friends as part of the community and watch the Cougars win.
~Mike

Emily Schmidt Talks About Her Time With Youth 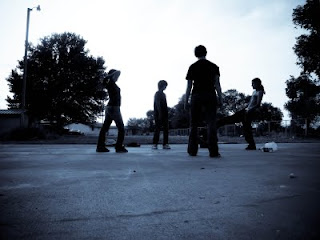 These past few months I've been hanging out with Aqua and her 7-month old baby, Shane. In the past, I've always had a plan for what to do when hanging out with her, but this last week I wanted to let her decide. We sat on the couch in her house, played with Shane, and just talked for a while. Then Aqua suggested that we go to "Dads", a local diner, and get root beer floats...which was the perfect suggestion. I had been wanting to go to "Dads", we both love root beer floats, and it was something that she suggested and wanted to do. It was perfect. The whole afternoon was full of goodness. 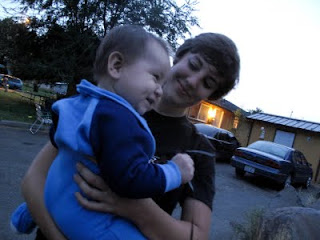 In addition to being with Aqua this past week, I was happy to spend time with some other teenagers from the rez. The Yakama Cultural Center's theater shows new movies each Thursday evening, so Mike Shaw, three youth, and I were able to go see a movie last Thursday. The movie ended up being less than awesome, but just being with the youth was so great. 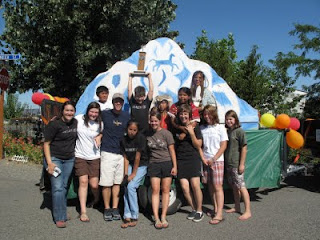 Fall is approaching, which means school, colder weather, and of course, parades and festivals. A couple weeks ago there was a Fall Festival in the small town of Harrah here on the reservation. The day began at 8:30 for us as we put the finishing touches on the Sacred Road float that would be in the parade. During the parade we threw out candy to all the children, passed out invitations for Tuesday night Bible Study, and had an all around great time. As we passed by the float judging table during the parade, we heard over the sound system that our float had won FIRST PLACE! The rest of the day we walked around Harrah Park where there was music, tons of food, games, and, best of all, a 3-on-3-basketball tournament. It was great to feel like part of the community and not just by-standers. We ran into many familiar faces from the summer and from Bible Study. 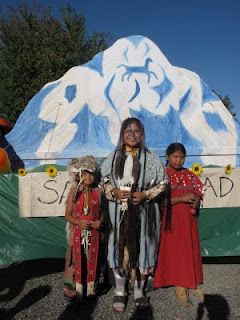 I have been hoping to start mentoring two young girls that have been coming to Bible Study for a while now. Their names are Lisa and Lateet. They were both at the festival and it gave us a chance to hang out together in a very casual setting. I had a good time talking and watching some basketball with them.
From 1st place in the parade, to Indian tacos, to an Italian soda made by the White Swan Cheerleaders, to being beat horribly in 3-on-3 B-ball, Saturday was an enjoyable day for all and a good day to put down in Sacred Road history.
~Gretchen

Heather German's Thoughts on the Back to School BBQ 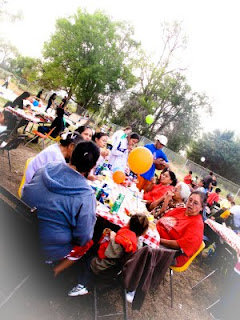 A couple of weeks ago Sacred Road hosted a Back to School BBQ for the community of White Swan in Totus Park housing project. 180 people enjoyed a meal of hot dogs, hamburgers, chips, watermelon, and pop. The highlight of the evening for the kids was a blow-up bouncy castle. Most importantly, though, we saw people who regularly attend Bible study volunteer to serve their community. As soon as the Sacred Road team arrived at Totus, kids and youth immediately started helping by setting up tables and chairs. Two men, Greg Arquette and Allen Slome grilled with staff member, Chuck Clevenger for 2 1/2 hours to make sure everyone had enough to eat. Wendell Hannigan was the Emcee for the night opening the evening by thanking everyone for being there. Several women enjoyed helping out as well. Kate Enyes helped set up the buffet table and Leah Wyman tied down 200 helium balloons donated from Little Caesars, and handed out 100 Sacred Road T-shirts with her daughter Nita. 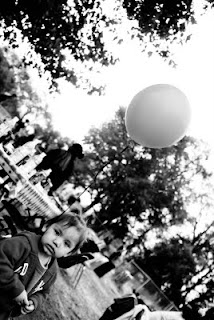 The BBQ seemed to be one step closer in the journey towards a functioning church in White Swan. Many people heard about Tuesday night Bible study that had not heard of it before and this past week at Bible study we had lots of new faces. The evening was one more good memory in my mind associated with Sacred Road and Christ's love, and hopefully it was in the minds of all the kids, youth and adults who came.
~Heather
Posted by Sacred Road at 10:03 AM